Thank you Lezli for this amazing video of Noushka racing around at Parc Gallery. Power to the tri-pieds!!!


Gallery Parc's future seems to be secure. Claude Trepanier is working with city Councellor for Saint-Henri/Petite-Bourgogne/Pointe-Saint-Charles Veronique Fournier to ensure plans for providing a better shelter, seating areas, lighting and general care of Gallery Parc move forward. Below is a list of issues, produced by Claude in early July, that require immediate attention. These have been forward to the city with the expectation that they will be addressed. However, as Claude explains, at this point it is important to remain vigilant and be peristent.

1 - Lighting
Requires that a an application for a feasibility study be submitted to the city.

3 - Shelter proposal.
Currently the idea is to acquire a former STM bus shelter and install it on a concrete base. This construction is subject to application with the city’s building division.

The proposal to install the tables on concrete bases was rejected because moving the tables throughout the season allows the parks vegetation to regenerate.

5 - Gates
A request has been made to have the gate’s hinges installed on the outer side of
portal so that they will open to the outside of the portico.

A request has been made to have the gate areas paved with concrete to avoid puddles and mud from heavy rain or melting snow.

6 - Grass maintainence
A request has been made to have the grass cut every two weeks in the spring and early summer.

7 - Garbage disposal
Call 311 to request that the containers be empted and notify them if the bins are being used to dispose of domestic waste bags.

Thank you for your vigilance Claude.

d is for dog

In August pouf! submitted a project proposal to the Canadian Centre for Architecture, in response to a call for projects about what Montreal means to its users, A-Z. We chose "d" - for dog, naturally! Our submission, D is for dog, proposed to turn the spacious green lawns of the CCA into a pop-up or temporary dog park for one afternoon in fall 2012. The goal would have been to temporarily increase the amount of space on the island of Montreal for shared animal/human use, but we also hoped to engage visitors to the pop-up park in a dialogue about inclusive urban planning. Inclusive, that is, of our animal co-habitants in the city.

Our proposal was not among those chosen for exhibition/enactment, unfortunately. But we thought followers of the dog parc gallery project might enjoy taking a look at our proposal. We were certainly inspired by Parc Gallery!

Development continues on all sides of Parc Gallery

During our re-installation of the dog portraits in Parc Gallery, we were struck by the presence of huge building cranes on all sides, and the disappearance of the lovely, former ancien maçonnerie on the north side of the park, also home to a plumber and photography clinic, all vanished.

We came on the weekend, when there was no construction noise. Should one hope for the building projects to be staggered, to limit the noise pollution on a day-by-day basis, or for they to coincide, and thus - one hopes - end sooner?

The portraits are back! Visitors to Parc Gallery over the last few weeks will have noticed that we have returned the dog portraits, taken in fall 2010, to Parc Gallery's southern fence. Because a few of the portraits were taken from the park, we don't have quite as many as we did the first time around, so we decided to install them on one fence only. Maybe they will inspire more portrait-additions in the future!


We used the same system as last fall to install the pictures. Please let us know if any seem loose or need replacement ties!


The portraits seem no worse for wear despite being outside from August 2011-January 2012, when we took them down to show them at a public consultation (OCPM).


Of course, a dog user of Parc Gallery became quite interested in our work! 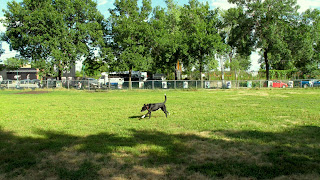 All done! A real dog outshines the pictures - but it's nice to see them up again!
Posted by dog parc gallery 1 comment:

A nice crowd was in attendance at the third "Café des z'architectes" at the lovely Maison d'architecture du Québec. About 50 people came out to hear - and contribute to - some different perspectives on the question of what is public space, to whom does it belong, and who enjoys the benefits of such spaces.

Cynthia of pouf! had the chance to share her views on these questions through the example of Parc Gallery, which at present is in a kind of public space limbo. Despite its 80-year history as a space made for the public, by the public, and despite its current, successful use as a green meeting place for a diverse community, the City has not yet reversed its decision of c. 2007 to privatize the land, a decision that was made with a view to permitting real estate development on this historic site.

Cynthia showed images of the park, historically and today, and argued that it is not only legal recognition that makes a space public; it is also what people choose to do, together, in and with a space.


The discussion that followed the five presentations circled around examples of European city spaces as idealized answers to the question of how to design and use public space; questions of who has the right to city space, and as so often happens, the homeless were discounted as not being part of the public who may enjoy parks and squares.

This is certainly not the opinion of pouf! We see the public realm, as Cynthia argued on Tuesday night, as constituting those spaces where one has the right to share in the use, and to debate the use, of space. A space where one privileged group decides for other, less privileged groups what may or may not happen, is not particularly public. Such a space is much closer to the definition of private space. So even though Square Viger was held up over and over again as an example of "failed" public space, in fact it is an excellent example of how the public defines and redefines the spaces at its disposal. Homeless individuals and their dogs occupied Charles Daudelin's sculpture, Agora, for years before being evicted in summer 2011. They made creative and practical use of a space that the city had virtually abandoned. See the work of Lindsay Cory, MA candidate, Concordia University, for more info.

Even if such appropriations make some people uncomfortable, they are a very clear reflection of the realities of the city, and the many different sorts of people who make up the city. Are we to hide such realities in pretty parks with perfectly functioning fountains? Are public parks only for business people on their lunch breaks, or families on weekends?

Despite the best efforts of the organizers and moderator Peter Fianu (and many audience members) the topic of the evening shifted from the public space to private space - condo developments, and spaces that look like public spaces but are in fact managed - aménagé - by private corporations, who can decide what does and doesn't happen there. And in that conversational shift, perhaps we saw the answer to the evening's central question.

If that is the case - that homeowners are the ones who profit from the "public" realm, among a few others - then it is all the more important that new and future homeowners in "District Griffin" and Les Bassins du nouveau havre choose to help fight for the continued freedom and flexibility of public space in Griffintown. Isabelle R. was at the MAQ on Tuesday night, and she did just that - speaking eloquently and passionately about Parc Gallery and her experience as a dog owner in the city. Bravo Isabelle!

Many thanks to Noémie Despland-Lichlert and Sophie Gironnay for inviting pouf! to participate, and to Alain Laforest and Sophie for making their excellent interventions throughout the evening. One thing is certain: if a public space is a space created in and through debate, discussion, even conflict, then the MAQ was such a space on Tuesday night. And we are all the better for it.
Posted by dog parc gallery No comments: 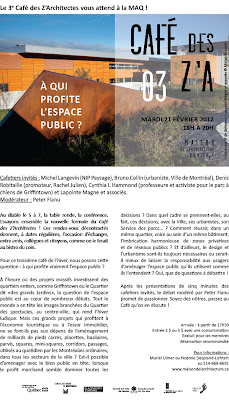 The plan for the night is for a table ronde, at which Cynthia (one half of pouf!) will give a five-minute presentation about Parc Gallery. There will be four other presenters (Michel Langevin, Bruno Collin, Denis Robitaille, and a representative from Lapointe Magne et associés), each of whom will discuss the question of public space from their perspective. After the end of the table ronde, the discussion will be opened up to the general public. This is a chance for users of Parc Gallery to have their say about this important public space! Please come if you can.

dog parc gallery
Griffintown, Montreal, 2010-2012
pouf! art + architecture makes designs, exhibitions and special projects about the built environment. We conceived of dog parc gallery in 2010 in response to a call for projects about the postindustrial neighbourhood of Griffintown in Montreal (see Urban Occupations Urbaines link, below). Parc Gallery is a dog park located in the former heart of this neighbourhood, at the intersection of Olier, Basin and du Séminaire streets. Plans to develop this section of Griffintown suggest that the future of this beloved and well-used green space is in question. pouf! art + architecture is working with the users of Parc Gallery starting in the fall of 2010 to create greater awareness about the success and importance of this public green space in Griffintown. Through our research, this blog and a public exhibition of dog portraits, which took place on 27 August-16 September 2011, our goal is to demonstrate how appreciated and cared-for this park is. We believe that Montreal should have more spaces where animals and their human companions can share in the city, together.

Missed our event? Fill in this form!